Pierre Labouchere commissioned the original Stable Block to be built after 1815. Although built of red brick, with fine penny lime pointing (a penny was used to draw a line in the pointing), it was at some point clad in a cream limewash, probably to compliment the white façade of the house. The limewash was partly removed in the 1980s. The Stable Block accommodated nine horses, six carriages, and a harness room. Above, on the first floor were haylofts and bedrooms for staff. 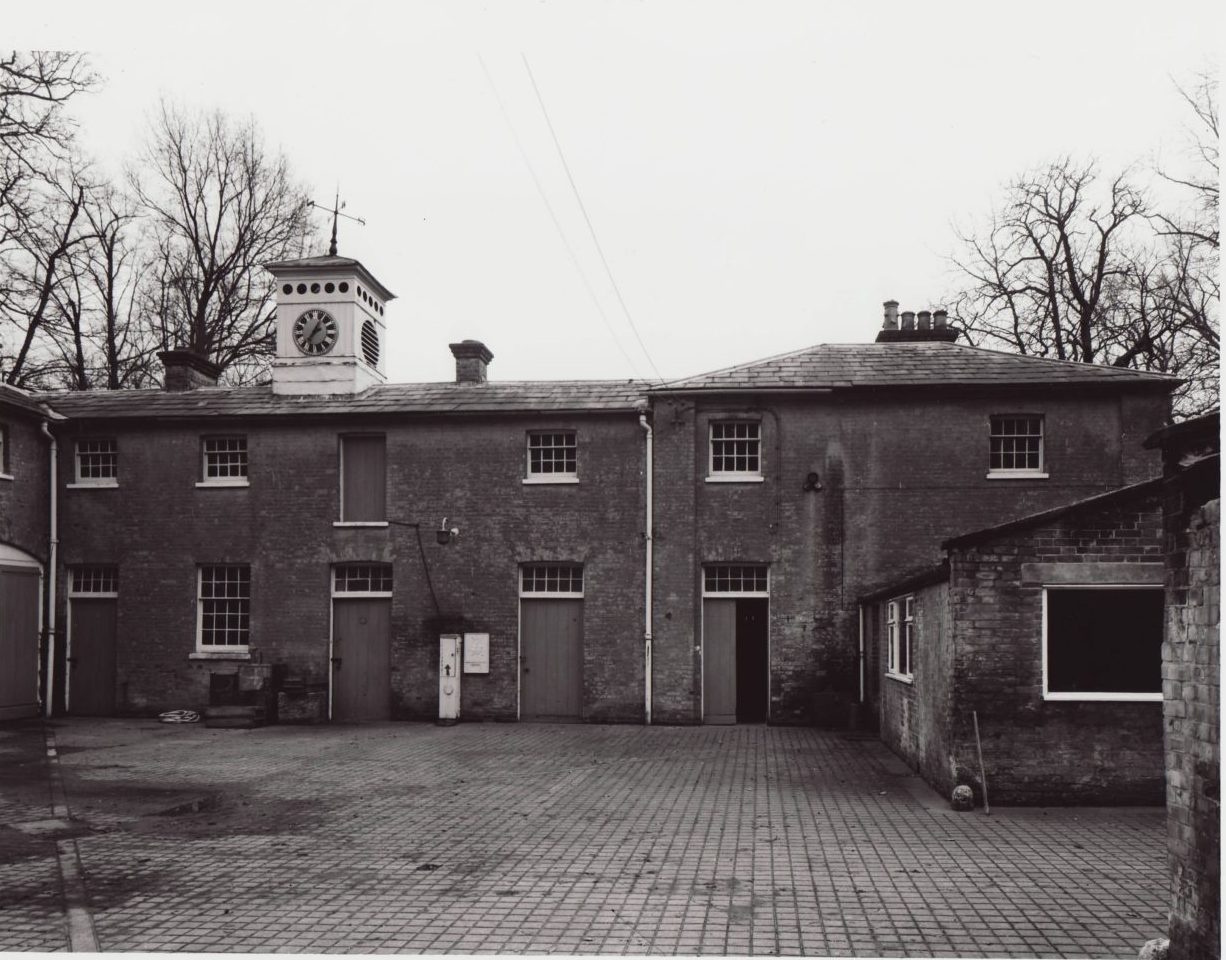 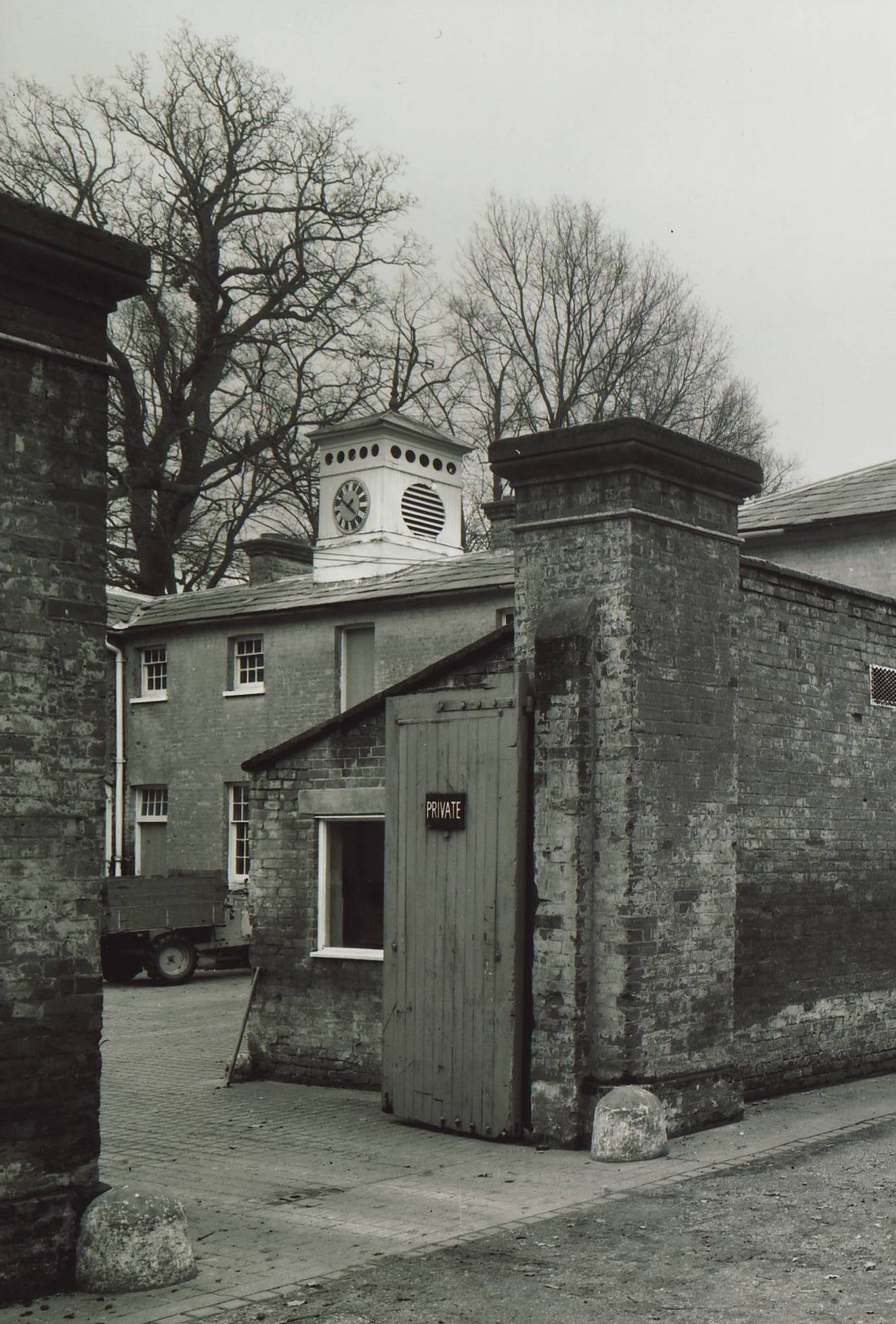 Around 1825, John Richmond, a well-known clock maker in Chelmsford, installed the clock into the Clock Tower. Attached to the Stable Block was the Head coachman’s cottage, which is still in use today. John Attwood is believed to have added the water tower between 1839 and 1854. Between 1905 and 1920, Sir Daniel Gooch introduced mechanical power to Hylands and converted some of the carriage accommodation for his cars. An inspection pit was dug below what is now the Café. Restoration revealed car registration numbers for a Rolls Royce, Daimler, Rover, Panhard and Renault pencilled on to the old green garage doors.

After 1966, Chelmsford Borough Council used the Stable Block as the park depot and store for salvaged materials from the house. Since the  restoration, the depot has relocated to new buildings at Home Farm allowing the Stables Centre to be open to the public with a café, shop, artist studios, and education room. 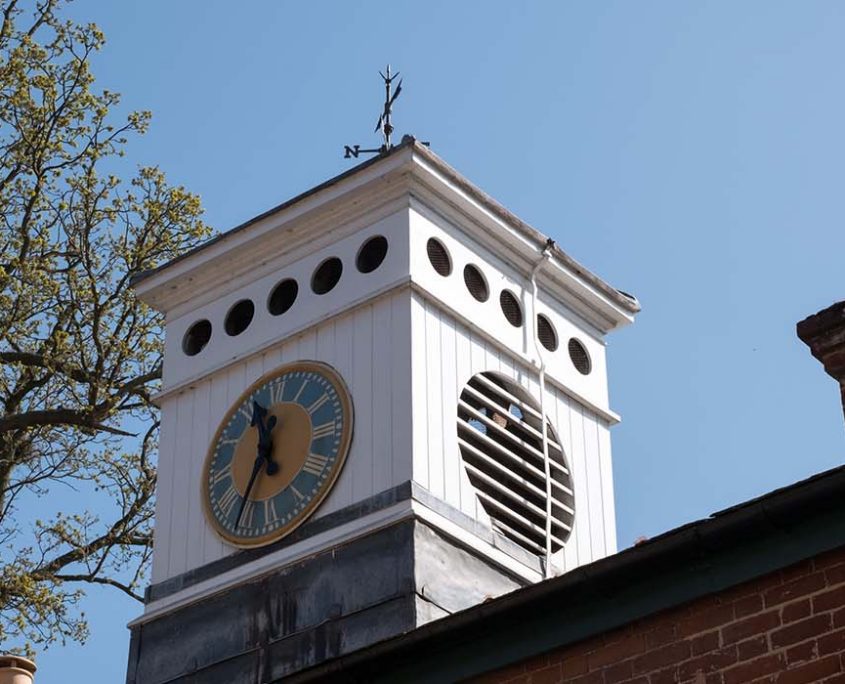 The turret or stable clock has a two-train striking birdcage movement made by local clockmaker, John Richmond of Chelmsford. Richmond is recorded as working in Springfield from 1800 to 1824. No other turret clocks, signed by Richmond are known, but the turret clock in Ingatestone Hall is of a very similar construction and was probably made by him.The clock has an anchor escapement and, very unusually for a turret clock, rack
striking. Conserving the original materials of the clock was the
most important consideration during the extensive restoration. Although the escape wheel and pallets were replaced due to inappropriate previous repairs, the original damaged parts are displayed alongside the clock. During the restoration of the clock
movement, automatic winding was fitted to both trains of the clock dispensing with weekly manual winding. In 2007, Chris Papworth MBHI of Kelvedon Clocks carried out the restoration work. With over 40 years experience in the repair of antique clocks and watches, Chris is a member of the British Watch & Clockmakers’ Guild and the British Horological Institute.