Hylands Estate is almost 300 years old, and has a fascinating and rich history. This illustrious history accounts for nine owners including Chelmsford City Council and a landscape architect who put the Estate on the map, two world wars, and a restoration to its former glory. Each owner has stamped their mark on the estate, extending and remodeling according to their tastes and fashion of the day. Additionally, the land dates back to the Prehistoric era.

There is evidence of some Mesolithic blades and flakes adjacent to the Park. Close by, aerial photography has revealed cropmarks showing an irregular enclosure containing a ring ditch of possible prehistoric date.

Much of the eastern boundary of Hylands Estate is marked by the line of the Roman road running between London, Chelmsford and Colchester. The line of the Roman road is now substantially marked by the modern A1016 leaving Chelmsford to join the A12, the major route south. Most of the archaeological evidence relating to Romano-British activity is in the Widford area possibly relating to the Roman road itself. A single Romano-British Hod Hill type Brooch of 1st century date and four grey pottery shards were found within an area of former parkland to the North of the house. Fragments of tegula, a type of Roman roof tile, found at Widford suggests that there were further buildings along the road.

The earliest mention of the word Hylands (in this spelling) is found in a manuscript in 1204 relating to forest boundaries. Hylands is believed to be part of the estate owned by Richard de Montfichet acquired by marriage to Jacosa, widow of Thomas D’engaine. Upon the death of Jacosa in 1274, estate was distributed among the children of Richard’s 3 sisters. To the immediate north of Hylands, Writtle was an important holding in the late Saxon/early medieval period. There is evidence that from 1617 the name Hylands has been used interchangeably with Highlands.

Several references to Hylands occur throughout the Tudor and Stuart eras. In 1500 Thomas Hawkin, yeoman of Writtle, died leaving items including the Highlands Field to be used by the Vicar of Writtle for the benefit of the poor dwellers in the alms-houses adjacent to Writtle church. Highlands Field was mentioned again in the 16th century when its ownership had changed. The Manor of Shaxstones was recorded as comprising Highlands Field owned by William Bedell. The same Manor was owned by Sir Andrew Astley and his heirs in the 17th century and then the Brown and Roger families until it passed to John Plomer.

In 1726 the estate was sold to a young Essex lawyer John Comyns who had Highlands House constructed between 1728 and 1730. The grounds around the house were planned in the formal geometric manner with a clear demarcation between the gardens and the paddock and at the time extended to around 100 acres. 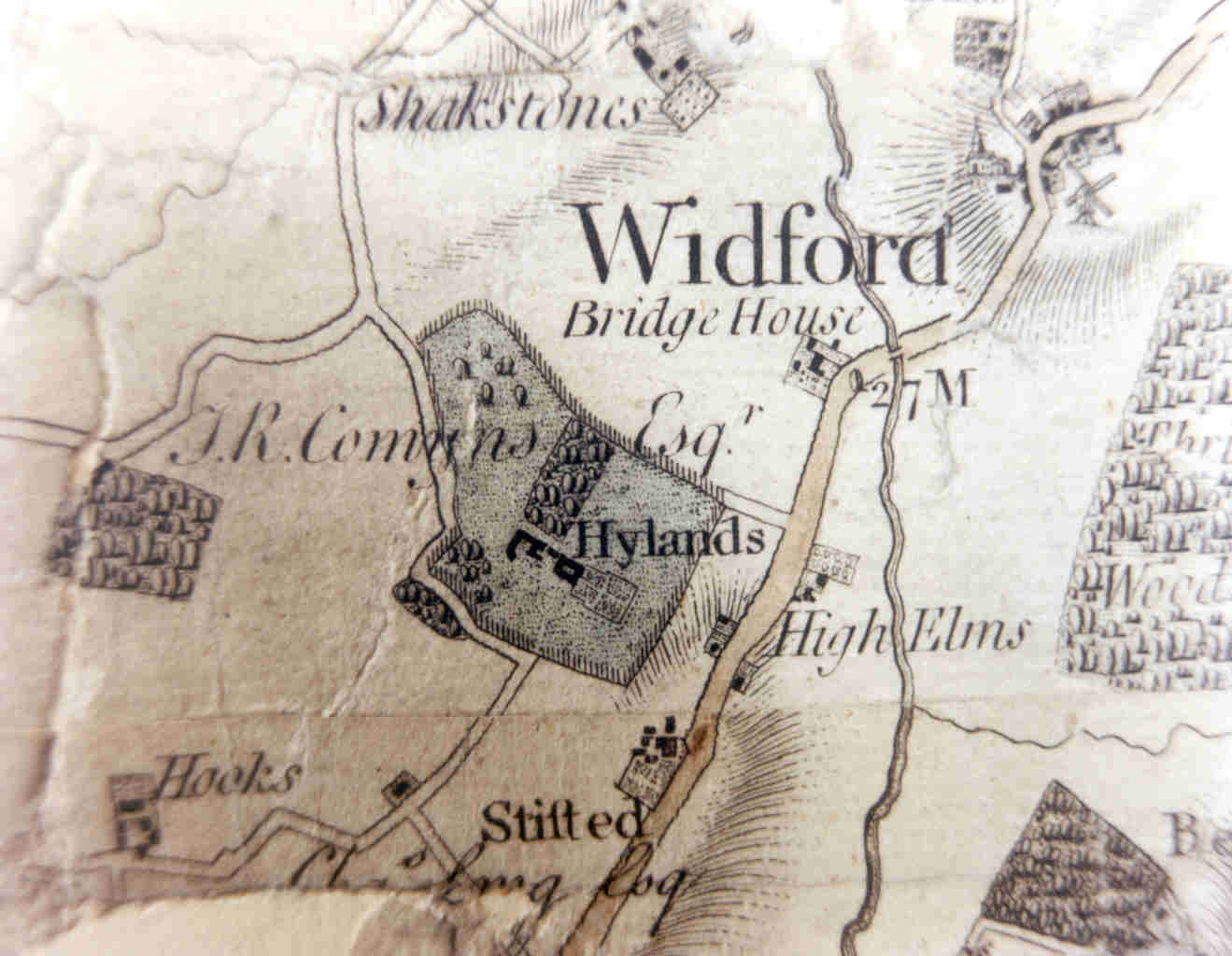 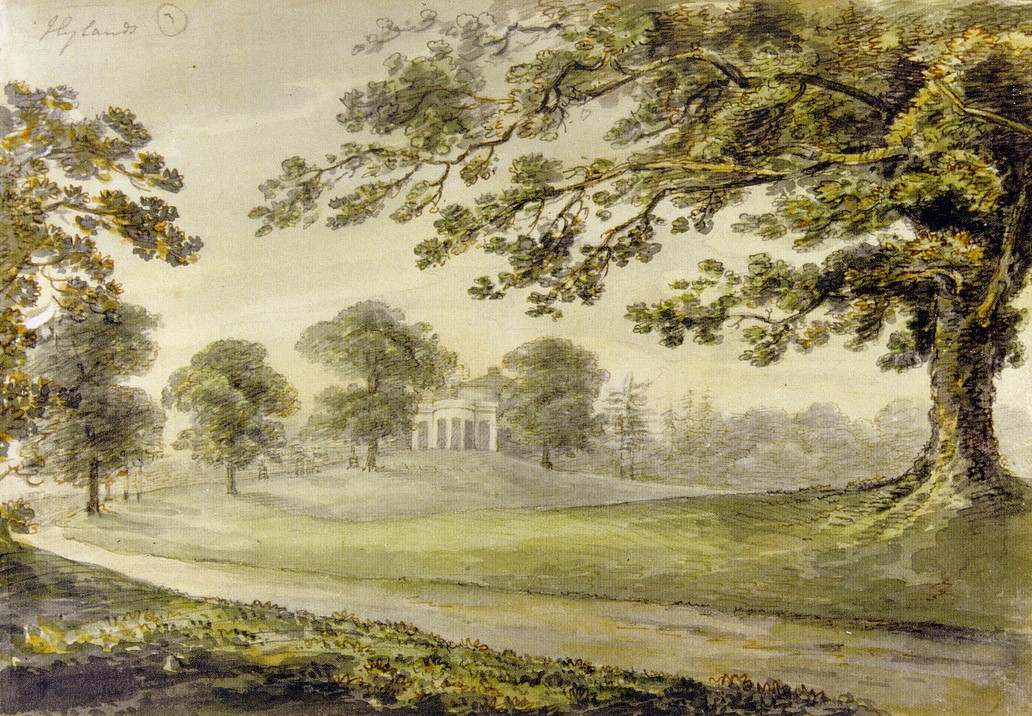 In 1797 Cornelius Kortright bought Hyands House and from 1800 he begun a modernisation process. At the time, the Romantic Movement was fashionable in art, architecture and literature. In garden design the work of Humphry Repton, an exponent of the ‘Picturesque’ manner, was highly sought after. During Autumn 1797 and 1803 the estate was transformed. There is some evidence that it was Humphrey Repton himself, living in nearby Hare Street, designed these changes. Repton would draw his designs in his Red Book to promote these ideas to clients. The Red Book for Hylands was last reffered to in the Chelmsford Chronicle in 1839. A number of landscape features which Repton typically encouraged were implemented at Hylands. The park was surrounded with belts of trees, an artificial serpentine lake with three islands on the north side of the park was created. Furhtermore a walled kitchen garden was installed, a drive to Writtle Gate created, and the park further extended as far as the river Wid.

During Labouchère’s tenure he saw the extension of the park southwards and designed new greenhouses and a large netted cage to protect the cherry garden. Labouchere invited Francis Nieman, from Haarlem, in 1824, to develop the kitchen gardens, in their new location in the east of the park. Nieman introduced Dutch methods of growing exotic fruit and vegetables and the distinguished architect, William Atkinson, constructed the glasshouses. The old kitchen gardens were developed as pleasure grounds. A large conservatory nearly 280ft in length was built using heating methods that were later incorporated into glasshouses at Kew and Chiswick.  Labouchère orchestrated changes to the pleasure grounds and the kitchen gardens which had a fundamental effect on the landscape of the estate. In 1824 the kitchen gardens were moved from the west to the east side of the park. The old kitchen gardens to the north west of the house were developed as pleasure grounds. The greenhouse in the old kitchen garden which was replaced with a much larger conservatory, nearly two hundred and eighty feet in length, with Portland stone flagstones and heated by cast-iron hot water pipes. This was a revolutionary way to heat greenhouses. These greenhouses undoubtedly helped Labouchere become a leading horticulturalist. Such was the success of his gardening that on 25th May 1832 the Horticultural Society of London awarded Labouchere the Banksian Medal for his exhibit of forced apricots, raspberries and melons.

A cherry orchard was planted with 98 cherry trees and Atkinson built a netted structure following designs from the continent. Ladies and gentlemen could wonder through the netted cage and help themselves from the fruit trees and bushes. 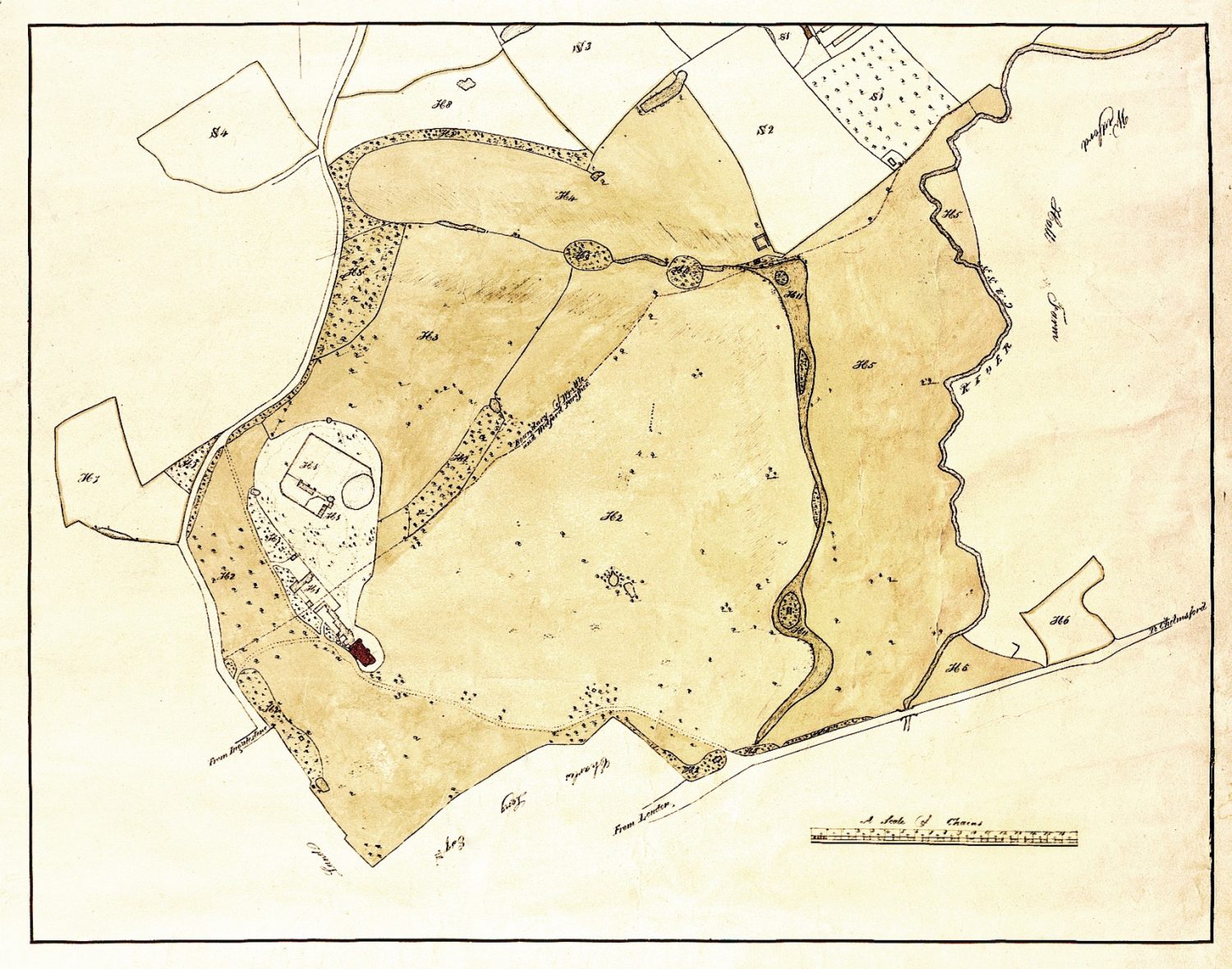 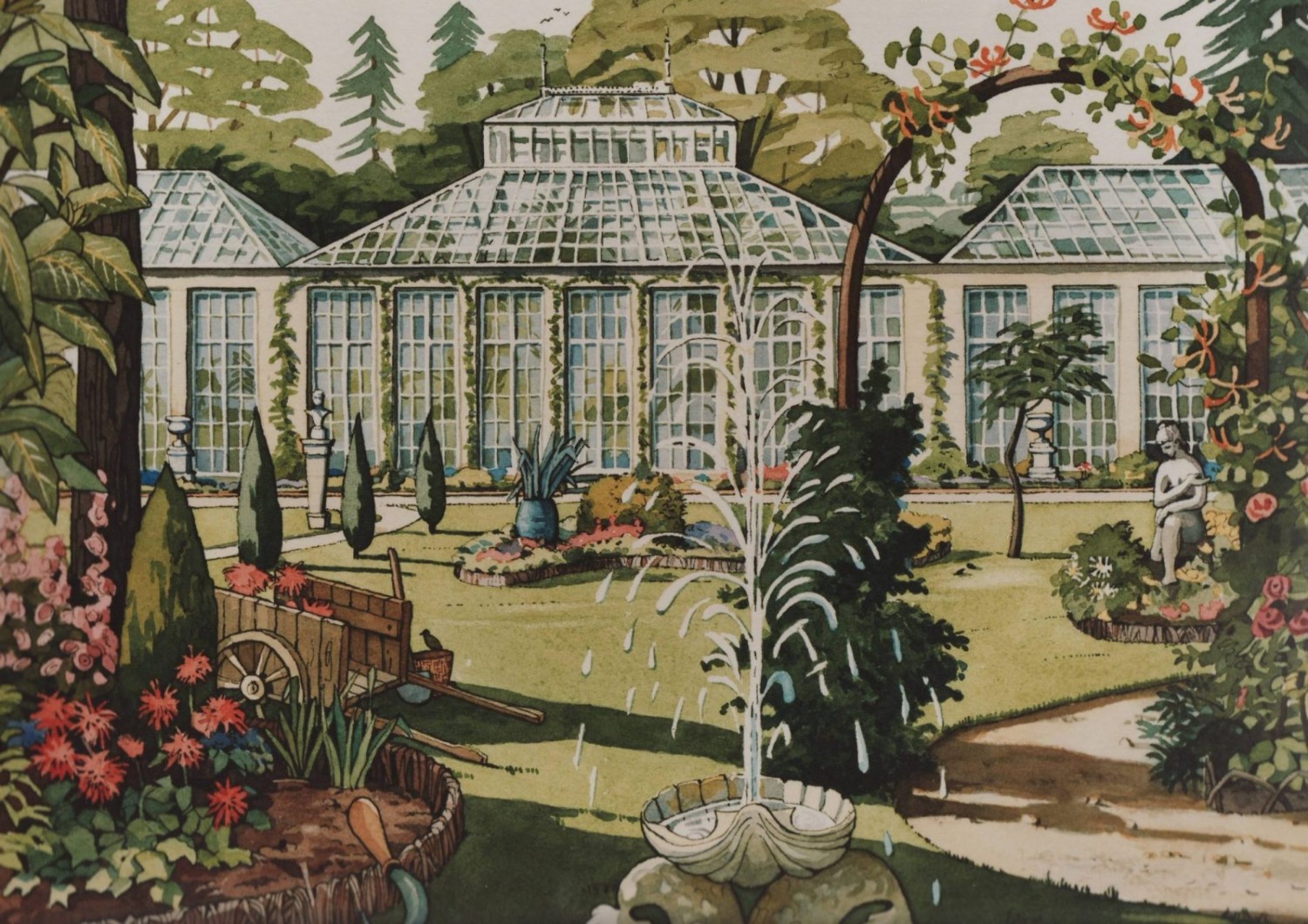 Speculator and MP for Harwich, John Attwood purchased Hylands on Labouchere’s death and extended his estate to 4300 acres. Under John Attwood a large brick wall was built along the London Road to screen the house, and at the same time a new Widford Gate was constructed. With the extension northwards, Writtle Gate was moved to the north-west corner of the park, along Paradise Road from Writtle. Margaretting Gate was created in the south-west corner of the park. Adjacent roads were therefore diverted and screened by planting and a tall brick wall. Neighbouring properties were demolished to provide Attwood with uncluttered views across his domain.

The estate prospered under Pryor’s patronage, with a team of gardeners looking after the Park with pride. Exhibits from Hylands continued to win prizes at the Royal Horticultural Society’s Annual Show and the Park became the venue for fetes, band concerts and all manner of social activities. A gardener’s bungalow was built on the edge of the pleasure grounds from the remains of the walls of the vegetable and flower gardens beside the conservatory, to the north of the house which were demolished. Pryor was a keen sportsman and tried unsuccessfully to introduce trout to the stream running through the Park. In the shooting season, he held regular shoots and acquired neighbouring land to expand his hunting ground. 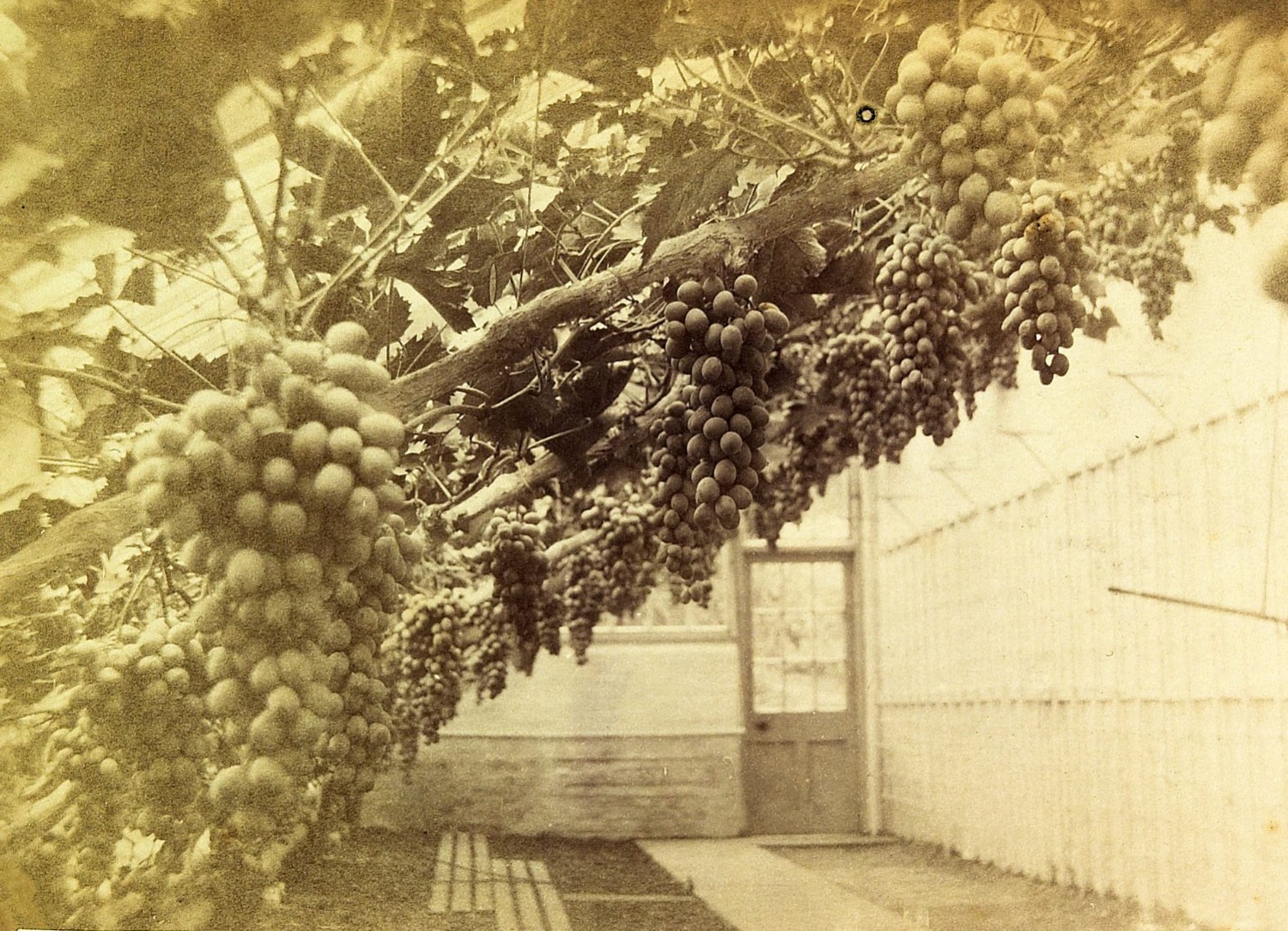 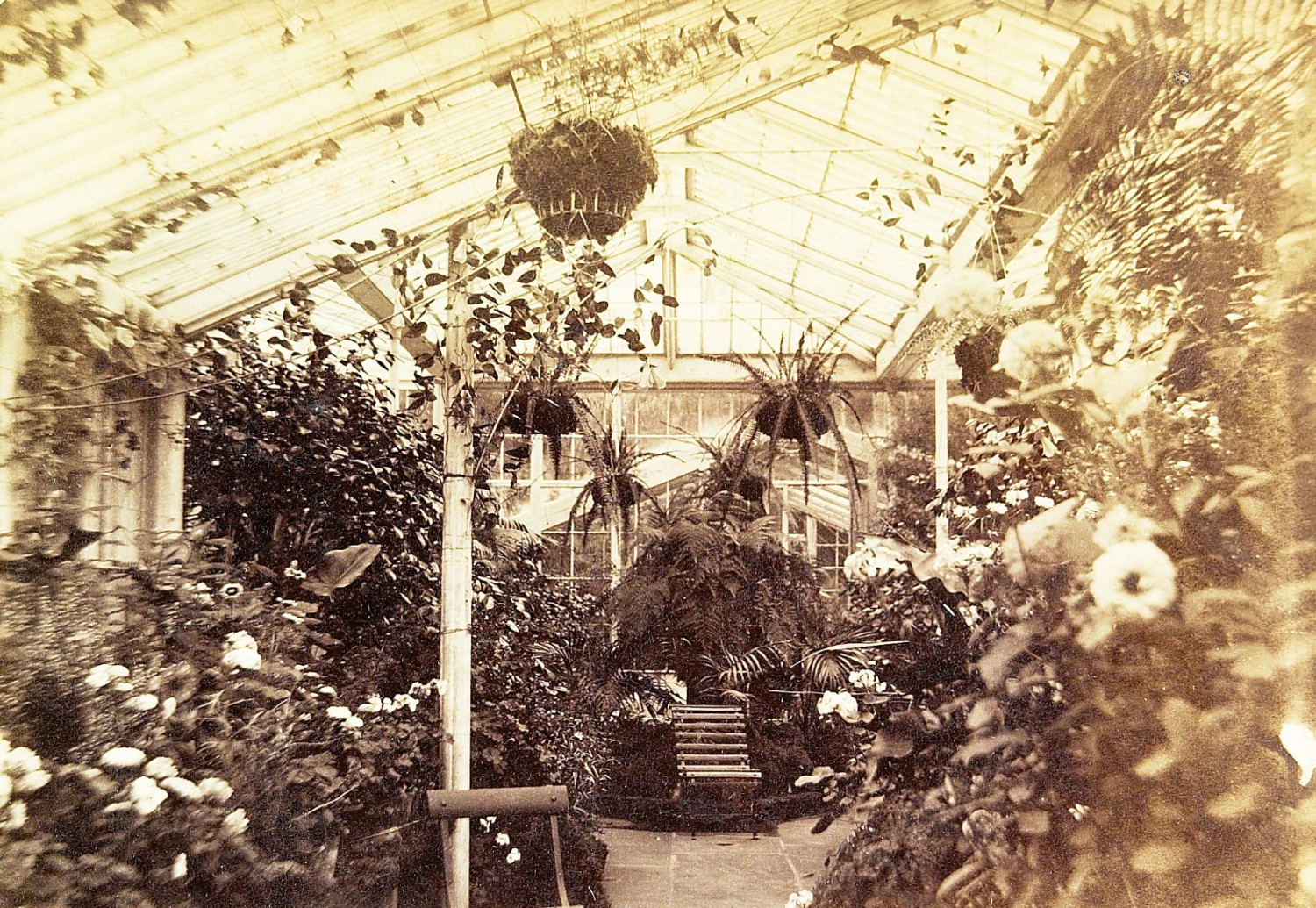 Sir Daniel and Lady Gooch entertained a great deal and the house and gardens were managed to provide for their guests’ needs and entertainment. There were between 16 to 20 gardeners who supplied the large amounts of flowers, fruit and vegetables required by the domestic staff.   Horticultural excellence was displayed throughout the pleasure grounds, especially in the large conservatory which contained a palm house, a tropical house and a temperate house.

Following the use of Hylands as an emergency hospital in WWI and proposals for it become the permanent exhibition ground for the Essex Agricultural Show in the early 1920’s, the Hanbury family bought the house and gardens in 1922. In the late 1920s Mrs Hanbury made many alterations to the area immediately around the house.  A terrace was constructed along the back of the house, with a terraced rose garden on the east side.  The low fence in front of the house was replaced with a rusticated stone wall and ha-ha.  Tennis courts were laid out on the east side of the lawn with an adjacent rustic pavilion. Rhododendron borders were planted to the rear of the lawn, beautifying the house, but partially screening the view of the park and lake from the house. The conservatory in the pleasure grounds was partially demolished and the remaining central portion was adapted to incorporate an indoor swimming pool with pergolas replacing the two wings.  Widford, London and Margaretting Lodges were also demolished, with only Writtle Lodge retained at the entrance to the north west. During the Second World War the new Special Air Service (SAS) set up their headquarters at Hylands. 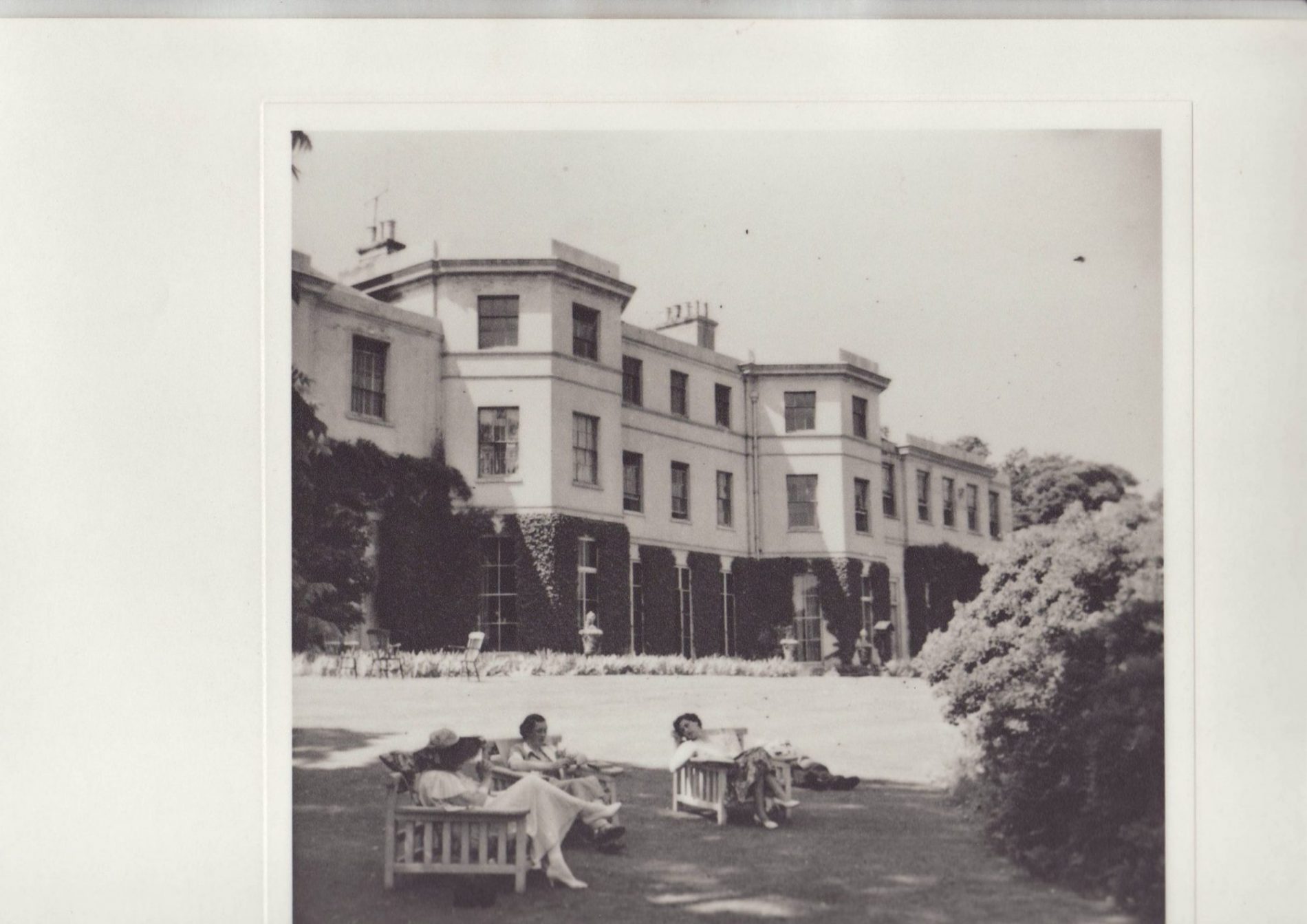 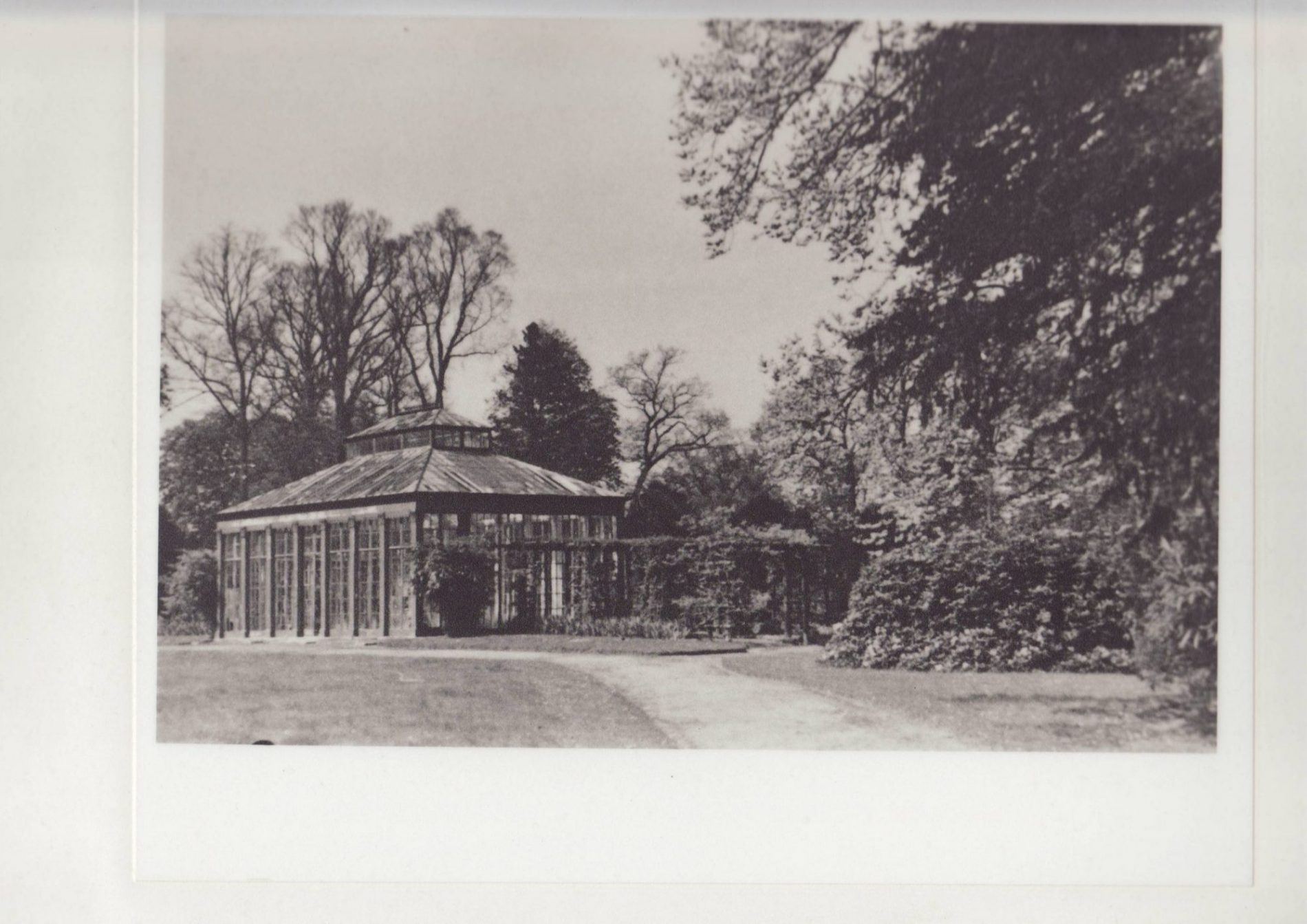 Hylands Park was opened to the public in 1966. Over the next few years, many ideas were proposed for the use of Hylands Park and various interested parties came forward to lease the house. The proposals included the development of a racecourse, an outdoor museum of Essex Town and Country Life and a golf course with various other facilities attached, such as an archery green, boating lake, angling, a camp site, stables for horse riding and a children’s playground. Hylands Park was included in the Register of Parks and Gardens of Special Historic Interest in England in 1987 and registered as Grade II. The registration covered the area of the park then within the Council’s ownership. Since then, alongside the house the parkland has been restored back to Humphry Reptons landscape including the Serpentine Lake  Nowadays the Estate is much loved and used recreationally and during the Summer hosts festivals and events on the grounds.